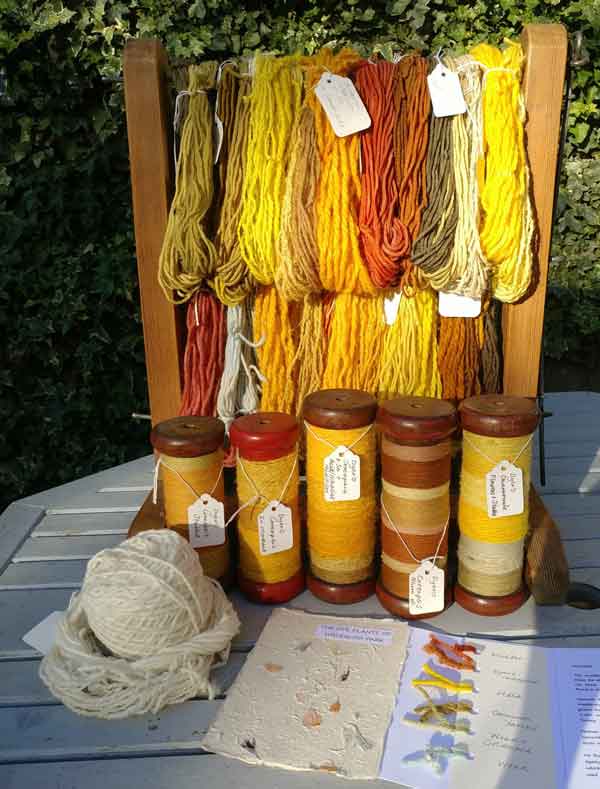 THE DYE PLANTS OF WATERLOO PARK

In recent years there has been a growing interest in reviving the art of natural dyeing from plants.

The raw materials are renewable and their waste products are biodegradable. It is exciting to learn how to produce a wide range of beautiful colours from tiny seeds and to share the joy that can be found in the natural world with others.

So this year the Friends of Waterloo Park decided to grow dye plants in the last two beds of the southern border. It is a sunny site, protected by yew hedges and the chalky soil is perfect for growing the historical dye plants madder, weld and chamomile. In the past, many people living in Norwich worked as dyers and weavers for textile manufacturing businesses bringing wealth and prosperity to the city. The dyer’s beds are a connection to our local history.

We called the beds ‘Nature’s Rainbow’ because it is our intention to make the following colours of the rainbow from the plants listed below:

It is our intention to use dyes in future craft events in Waterloo Park. We would hope to involve local children using dyed yarns and fabrics. We also hope to work in collaboration with the newly formed Norwich City Guild of Weavers, Spinners and Dyers providing exhibitions and demonstrations of heritage crafts.

During autumn we produced a range of coloured yarns from our first harvest of dyer's coreopsis and dyer's chamomile. The results of our first experiments were very exciting.

We now look forward to further experimentation with other dye plants over the next year.

There is a long tradition of using this plant to make clear, bright yellows which have often been used in Turkish carpets and kilims.

Dyer’s chamomile is a perennial. We bought some potted plants earlier this year and planted them out in mid June. They have been flowering ever since and as the flowers fade they are cut, dried and saved for the dye pot.

Later in the year we collected leaves and stalks and dried them separately to make a range of soft green dyes. 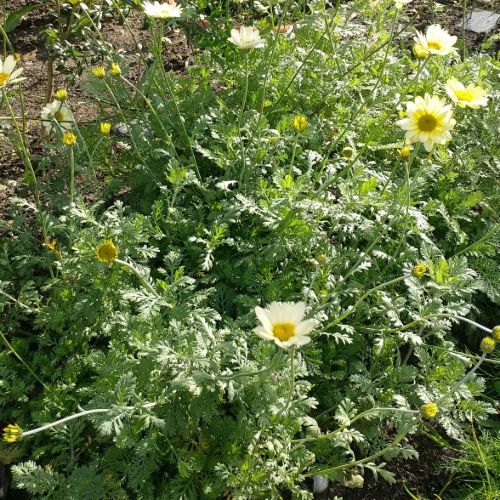 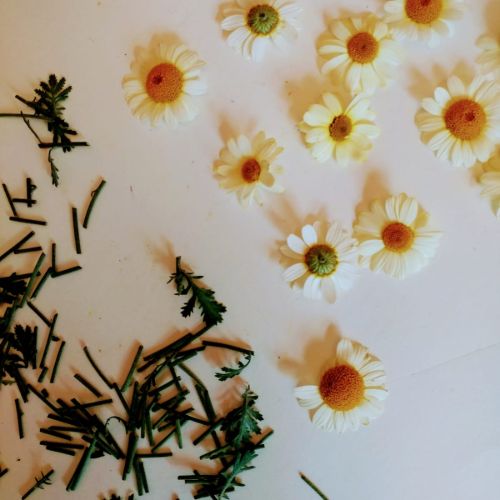 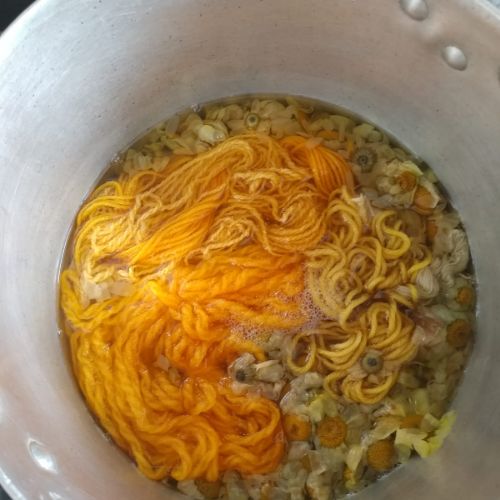 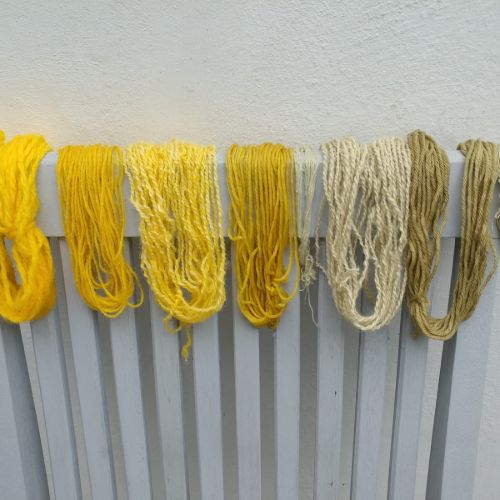 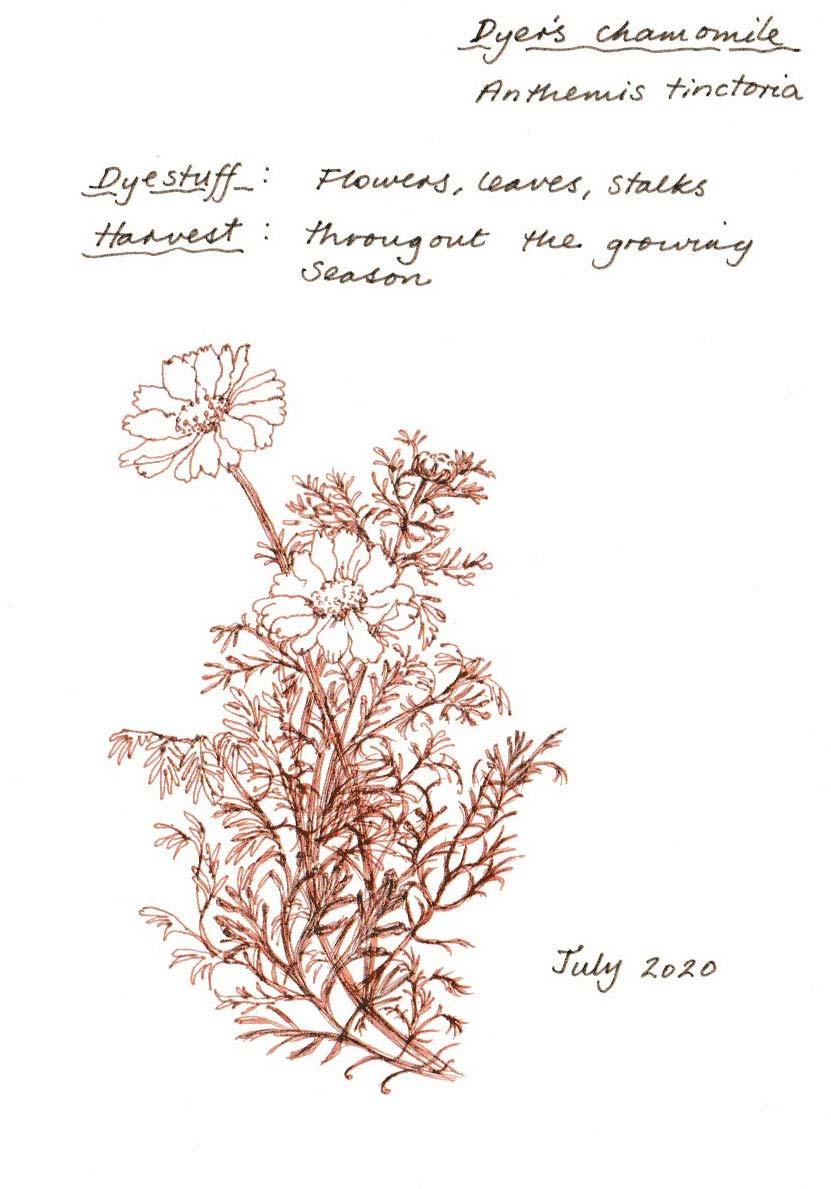 Dyer’s coreopsis is an annual. Plants grown from seed were planted out in mid June and began flowering in July.

We collected the flowering tops over the summer and dried them to making a range of yellow, orange and brown dyes.

The last plants were harvested in October and seeds have been saved for germinating new coreopsis plants for next year. 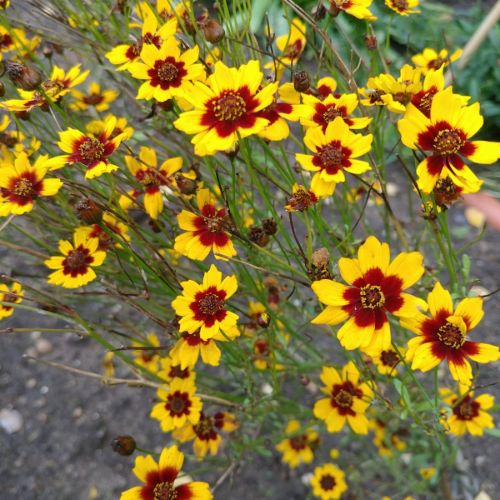 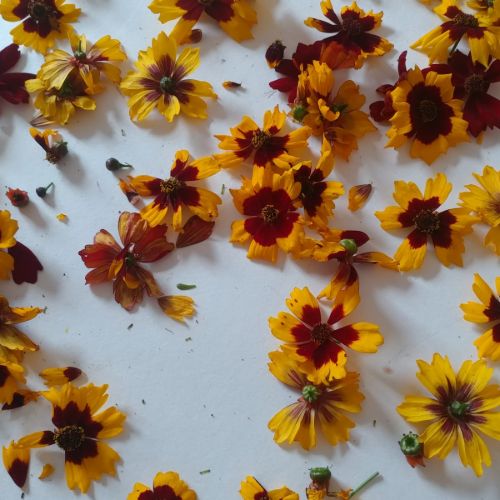 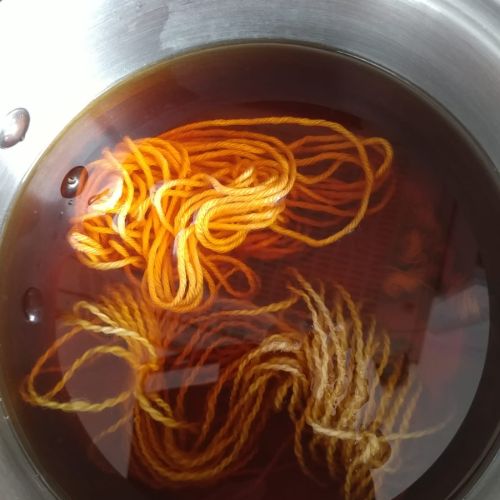 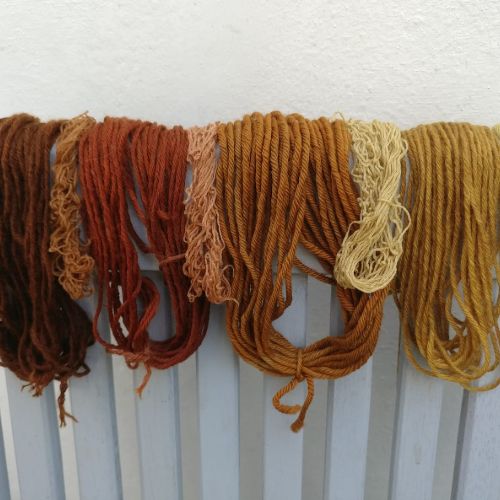 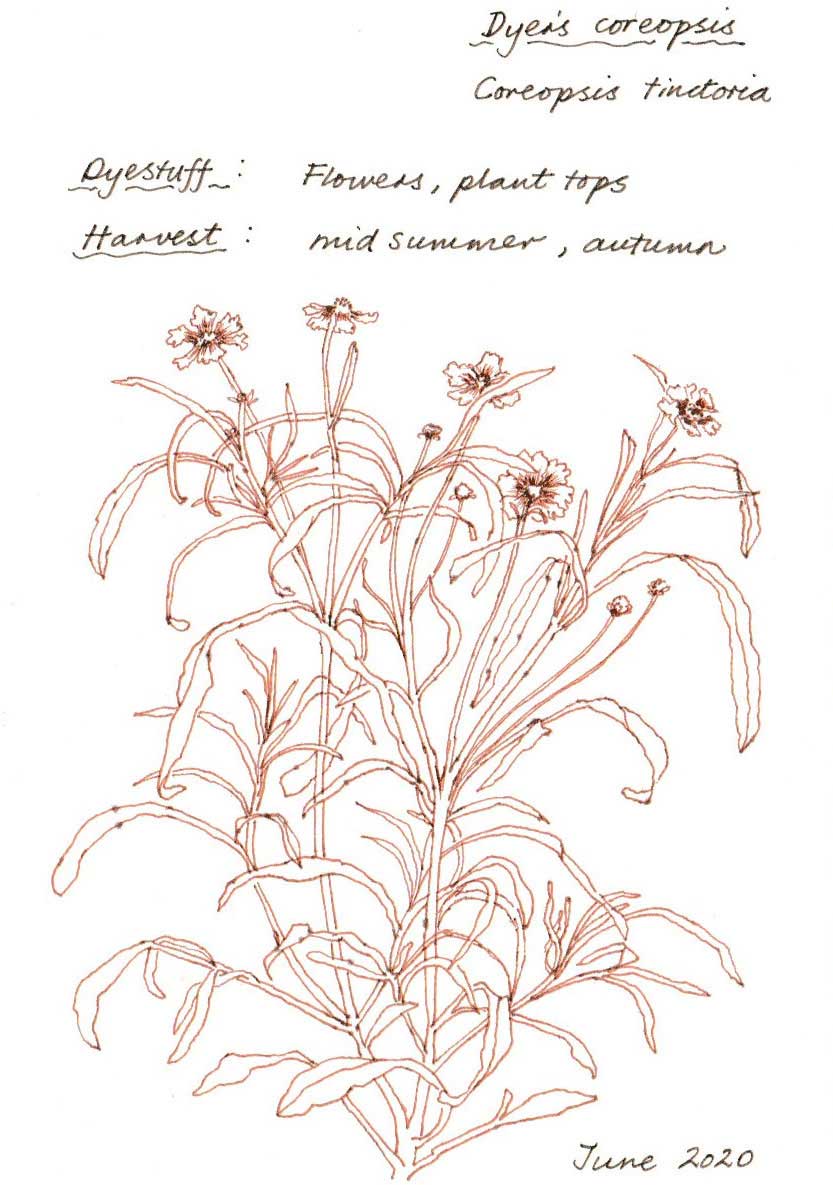 Woad has been used for over 2,000 years to produce beautiful blue dye. It is believed that Boudicca and her Iceni tribe painted their faces with woad to prepare for battle.

Woad is a biennial plant. The plants in our dyer’s bed were grown from seed and in their first year have grown a rosette of leaves. During August and September we began collecting leaves as they reached approximately 15 cm in length.

They were immediately washed, weighed and stored in a freezer with the intention of trying out a recipe described by Jenny Dean: jennydean.co.uk

The results can be seen in the photos below. 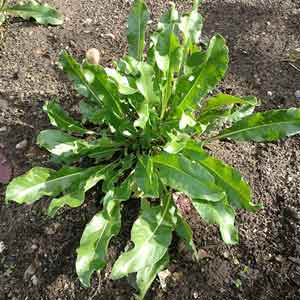 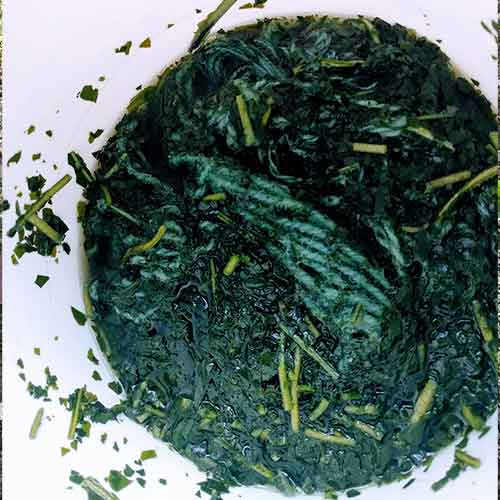 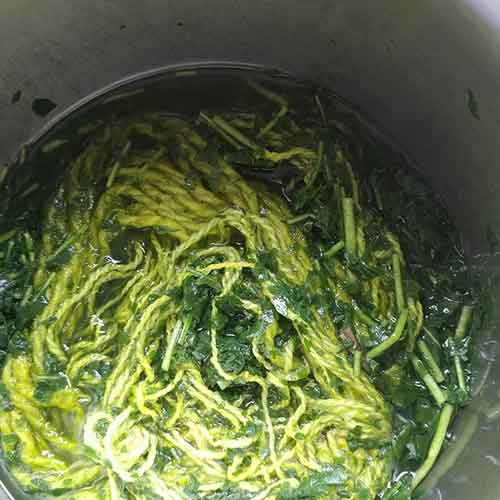 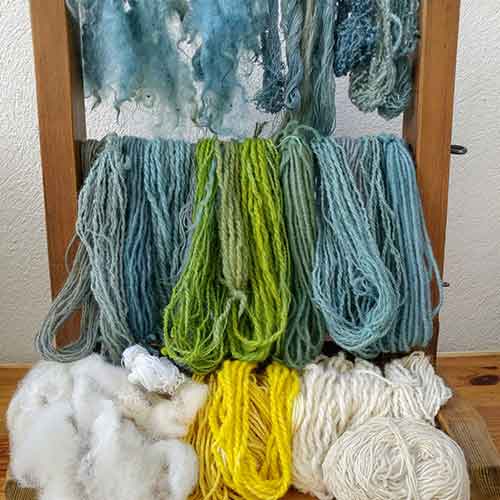 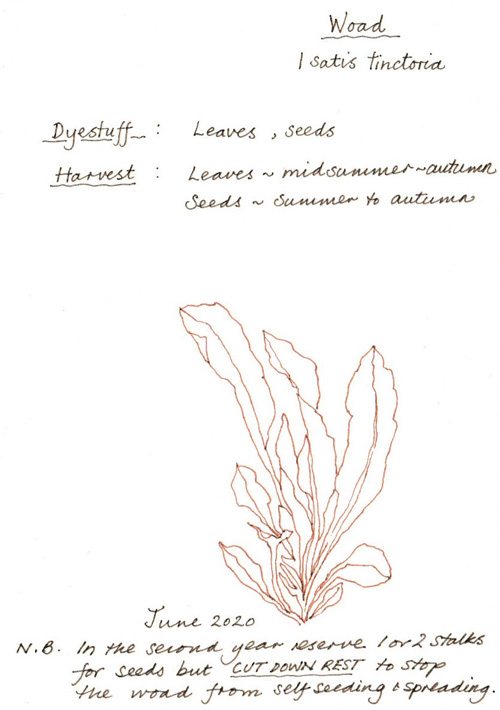 Common yarrow is a perennial plant and its tops provide a useful source of making soft olive greens. Some plants have been transplanted to our dyer’s beds.

They can be harvested from spring through to autumn, dried and saved for the dye pot.

We were surprised and pleased by the range of greens that were produced from this wild herb. 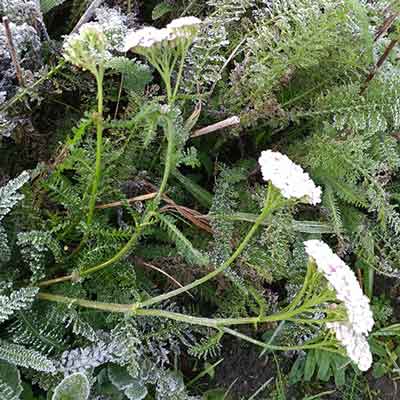 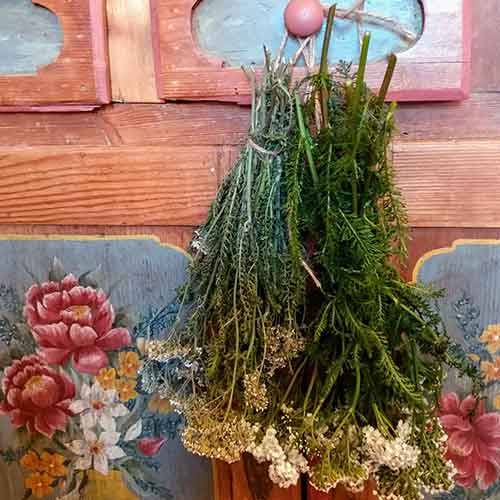 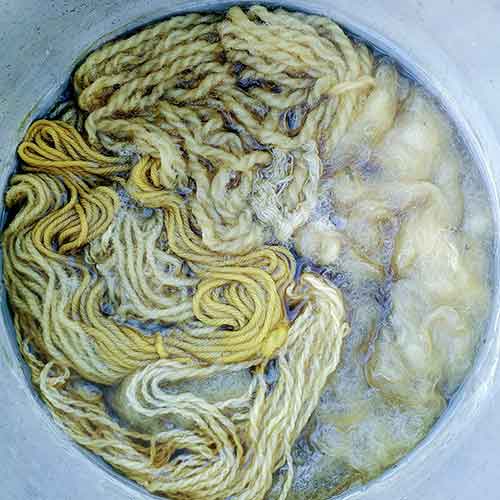 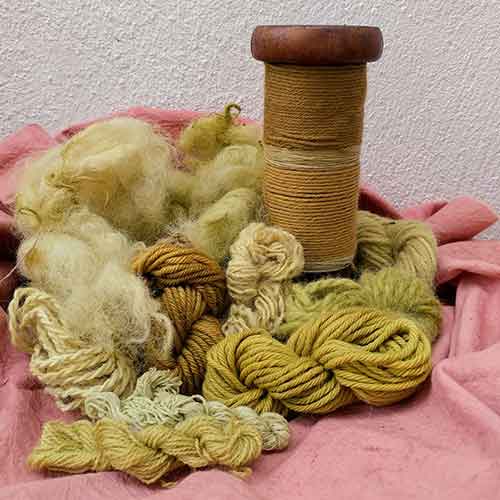 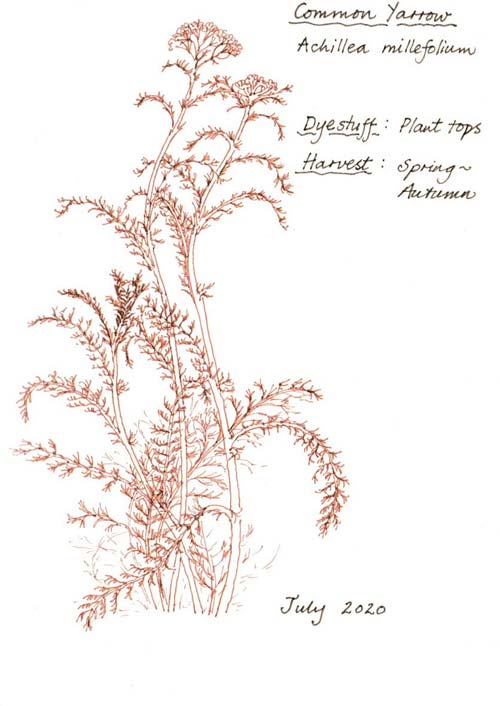 The madder plant has been prized from ancient times for the amazing red dyes hidden in its roots. It is known that material dyed with madder was found in the tomb of Tutankhamen.

Norwich has a street, named St John Maddermarket, where the dye was once sold. In medieval times it was grown locally but after the year 1750 was imported from France, Holland and Turkey.

Madder is a perennial plant. The madder plants in our dyer’s beds were grown from seed. In their first year they produced multiple leafy tops which were used in late autumn to produce a soft pink dye. In Autumn 2021, their second year, we will attempt to extract red dye from their roots.

In the meantime, we were delighted to receive a gift of ground madder root, some fleece and skeins of handspun wool from the Norwich City Guild of Weavers, Dyers and Spinners. This has enabled us to practice the art of madder dyeing. A true local craft.

The results are displayed on an antique bobbin rack, another kind gift from a member of the Guild. 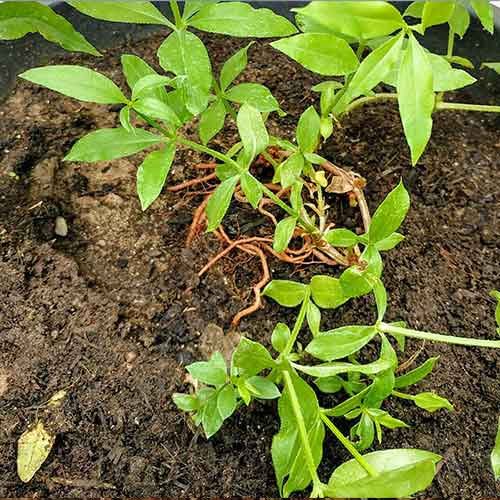 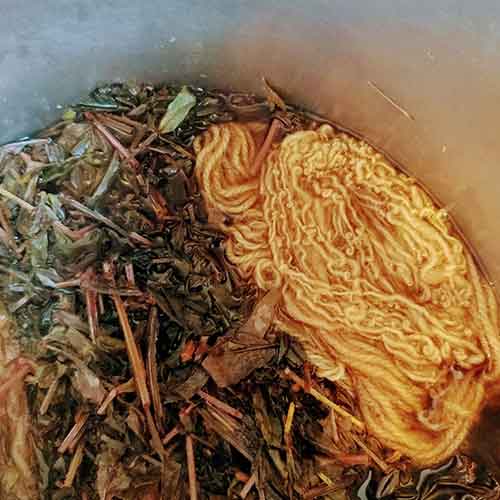 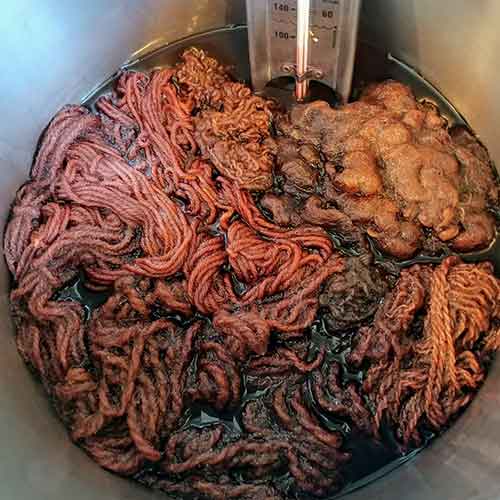 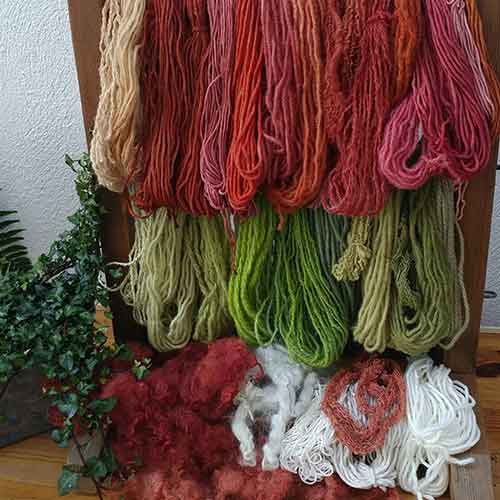 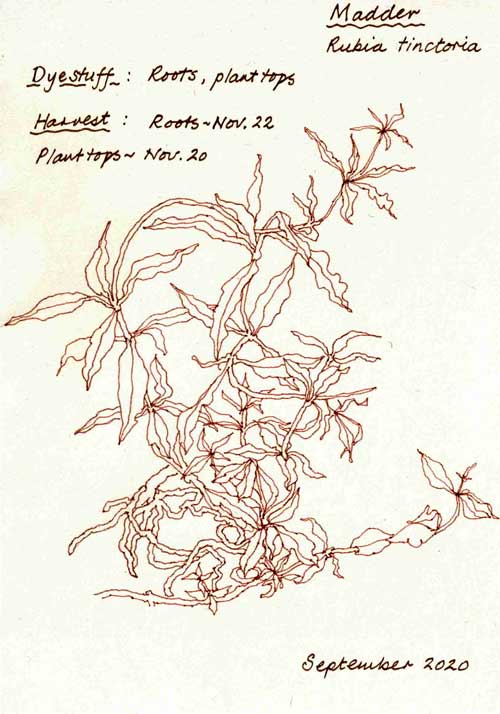